You are at Home How To What Do Women Know About Erectile Dysfunction?

What Do Women Know About Erectile Dysfunction?

While I would say that I’m no expert on the subject, I’ve had more than my fair share of lovers over the years, so I have experienced first-hand some erectile dysfunction – and have chatted to some of my girlfriends about it too. 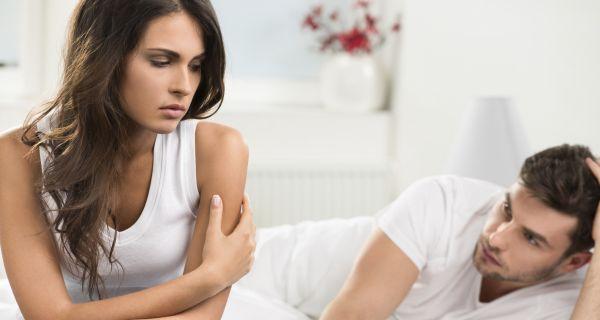 So, I know what erectile dysfunction is. It’s when a guy can’t get hard or he goes soft during the deed. I’ve had plenty of the latter and a few of the former. And there are definite patterns for both. If the man can’t keep an erection, it tends to be an ongoing problem, but if he can’t get an erection in the first place then it’s generally been a one off, situationally related.

My first experience with erectile dysfunction was on a date when I was the ripe old age of 17. He was too. We came back to his house and were kissing on the bed and… nothing. Nada. I was super stumped and quite embarrassed and left soon after. I thought it was because he didn’t like me, so I ignored him after that. Years down the track he said, “Why didn’t we date more? I really liked you”, and it finally dawned on me that it wasn’t to do with him not liking me it was something else. Silly me!

My most recent case of “he couldn’t get it up” was with a man I suspect was under the influence of a certain white powder that is notorious for not being able to rise to the occasion.

However, as I mentioned, going soft is far more of an issue than the other type of erectile dysfunction. Plus, it seems to be something that happens more when people start to get older. I’ve had ongoing partners that struggle to keep an erection more than half the time that we go to bed together. While it’s definitely not the be all and end all of a relationship, it’s preferable to be able to have enjoyable sex to climax (for both of us) most times that you go to bed.

There are plenty of ways to treat both of these issues, I’ve found. With shy guys, talking through can really help things. With those losing their concentration, some dirty talk can do the trick. And if it’s just not cutting the mustard? Then there is always medicinal help in the form of prescription pills, strips, and gels. It’s definitely worth it to do to not be disappointed and/or frustrated time and again which can keep happening if the issue doesn’t get addressed.

So! As you can see, I know quite a bit about erectile dysfunction, through my own personal history. When I’ve discussed some of these things with my friends, some of them are very wise and knowing and helpful, “Oh, have you tried such and such?”, and some of them are completely baffled and in the dark. The baffled women fall into two types of categories: “What is THAT? Tell me all about it” and the sexually repressed type who doesn’t want to hear about it at all and it weirds and/or grosses her out.

As you can see women have varying degrees of knowledge about erectile dysfunction – much like men really! Unless a women has had hands on experience with the issue herself – or has chatty friends who have – she might not know too much unless she’s done her research. Why not ask the woman and see?